What a weekend, I’m officially an ‘ultra-runner’! 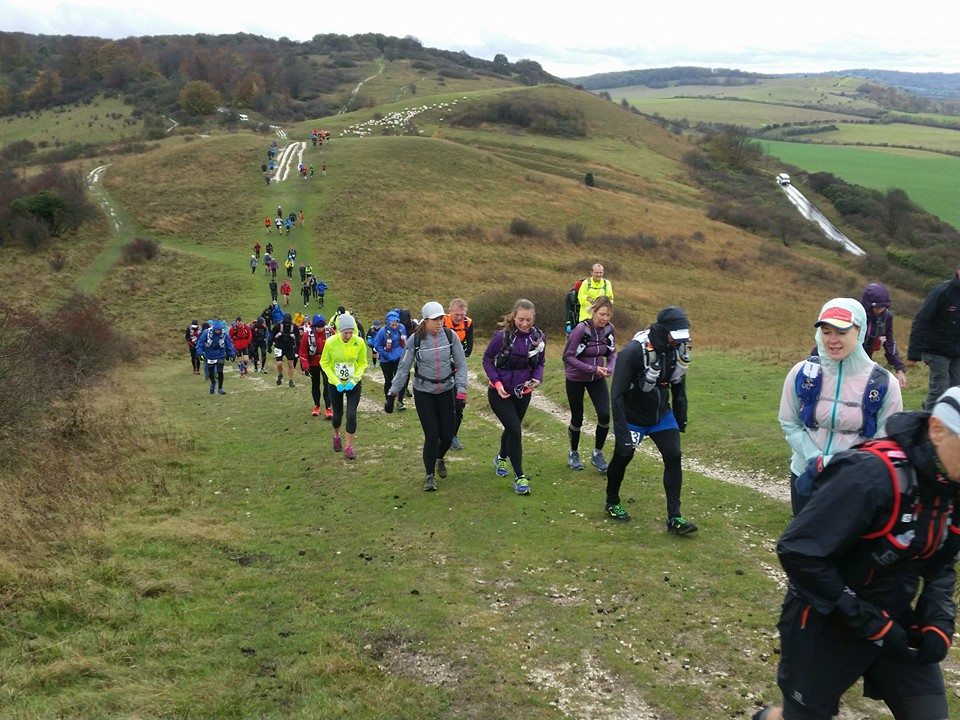 On a chilly Friday morning (November 2014) I headed over to a little place called Ivinghoe in Buckinghamshire to start the first day of a three day ultra-marathon called the Druid Challenge put on by www.xnrg.co.uk.  An 84-ish mile cross-country race following the Ridgeway over relentless, muddy and slippery hills to hopefully finish up in Swindon on Sunday afternoon.  There were some entrants walking the route which itself is still an admirable feat, and I believe there were 127 running.  I was feeling a little intimidated in this crowd of very experienced runners.  Most of them had run for years completing many marathons, ultras-marathons and some of whom have already completed the Marathon des Sables which is my ultimate goal at the moment.  So in comparison having only run my first official marathon last month I felt like the new kid that had just moved up to big school.

To add to the experience we were to be bedding down on gym mats in school halls each night consequently only getting around 3-4 hours a night as it turned out.  I found it pretty tough to sleep despite having ear plugs and being tired from the running, aches, pains and a few snoring bears were enough to keep me from dropping off for too long.

Day one – 29.5 miles:   This was to be my biggest run ever and according to my Garmin included almost 700m of uphill climbs to add to the challenge (whoop!).  We were driven to the start point halfway up a huge hill, before we even started the skies opened and with strong winds we had almost horizontal rain into us whilst we all tried to shelter behind trees as we waited for the countdown. 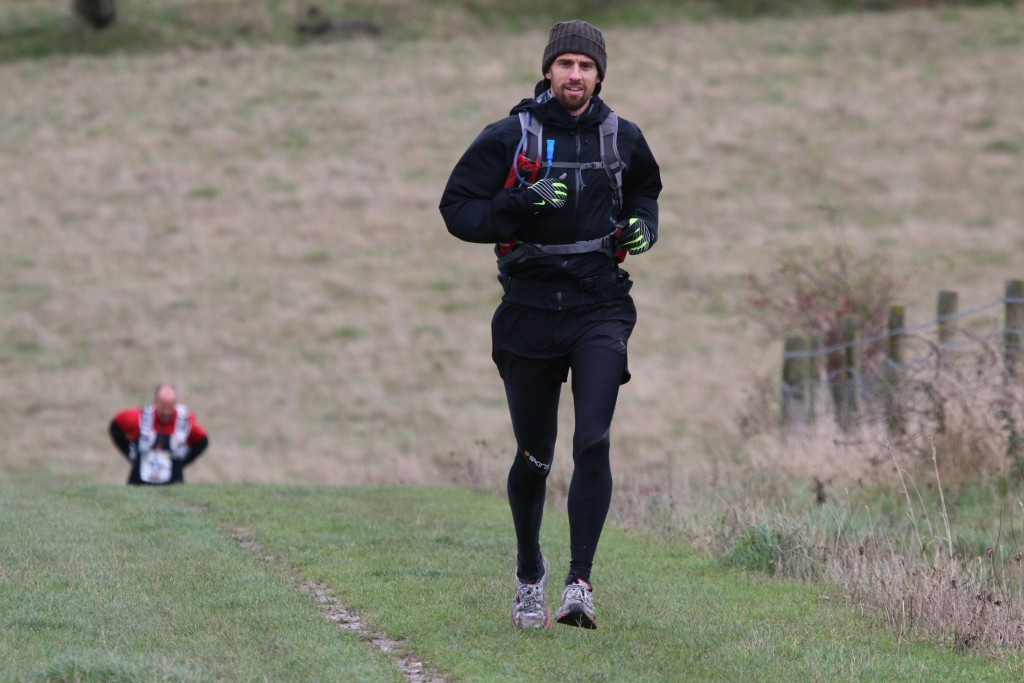 Then we were off, the ground was wet and slippery, winds were relentless and within minutes I realised I should have gone for trail shoes instead of the more supportive road trainers I’d opted for.  I was thinking the support and comfort might be best to ensure my feet make the distance.  But with every step slipping and losing traction it quickly saps your energy but it was too late to change, my first lesson had be learned already.  Only a few miles in I was feeling tired and thinking maybe I’d bitten off more than I could chew.  However I carried on just keeping a comfortable pace in the hope of making though the first day.  It was a mix of undulating hills, sloppy tracks and the underlying limestone pathway which I learned is the oldest roadway in the UK dating back as far as 3000BC.  However, as nice as that history lesson sounds, limestone is extremely slippery when wet which some were learning the hard way.  It was safer to run on wet leaves and mud when possible to avoid slipping into a ditch (this happened to a few people).  By 22 miles in my IT band had become very tight and was pulling on the knee causing me enough pain to mutter and swear though my teeth with each step.  Living in Peterborough and the Fens, hills are not something I get much chance to train on so is certainly something I need to do more of (lesson two).  I hopped, limped and winced my way to the finish and was pleased that I still finished 42nd which was better than I’d expected in this class of runners.  I was feeling pretty good aside from the knee pains and looking forward to dinner.

Our home for the night was a school hall, the organiser put on a nice spread of food and drinks, we ate, swapped stories and it wasn’t long before it was 10pm lights out in the hall and time to sleep ready for starting early for day two. 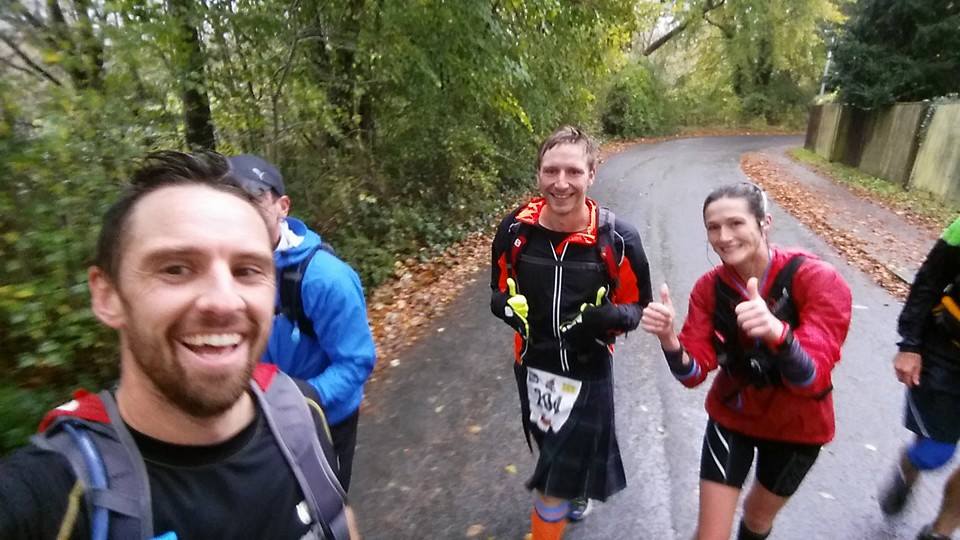 Day 2 – 27 miles:  The Walkers set off at 7am, we were going at 8am and at 9am the ‘elite’ faster runners would set off.  Oddly from the start point I found myself at the front of the pack leading with a chap called John who is due to be one of my seven tent-mates in the Sahara.  It felt a little optimistic leading but the pace felt okay so we carried on.  We grew our lead on the main pack only accompanied by Rebecca and then Rob Young who is currently running a marathon a day for a year.  (yes you read that correctly, madness).

I’d taken a few pain killers for the knee before setting off, but still after only one mile in I was feeling the pains.  I just hobbled along until everything warmed up which eventually helped it to subside. 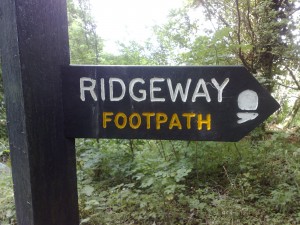 Myself, John and Rebecca had built a great lead around 6-7 miles in but then after stopping to question if we were on the right track saw a glimpse of a few day-glow runners going along the route we should have actually been on. Agh! We had to race across a few huge ploughed fields helplessly watching all these people who we left behind now way ahead of us.  After giving away around half a mile we defiantly picked up our pace to try to gain back the time we’d lost.  We charge past everyone over the next few miles on a desperate mission to correct our mistake.  Surprisingly we managed to keep this up, John dropped off after about 10 more miles, Rebecca and I stuck together until around 25 miles pushing each other on.  With the end only minutes away I just found new energy and picked up my pace to charge ahead eventually finishing in 23rd.

That night I’d booked in for some well needed physio, but before that I made use of the school pool, showers and even a sauna then we had a great feast of jacket potatoes, chilli, tuna, and apple crumble.  We’d burned around 4000 calories that day so needed to put that back in again ready for the final day.

There hadn’t been a great night’s sleep for many, aside from the one chap who’s snoring was so loud it kept half of the hall awake throughout the night. There were disgruntled whispery shouts to hush him, an empty water bottle was thrown in his direction but bounced off him without a twitch so eventually one guy went over and politely asked him to go and sleep in the hall (which he did).  It wasn’t much longer before the 5am wake-up call came with lights on and an early breakfast. 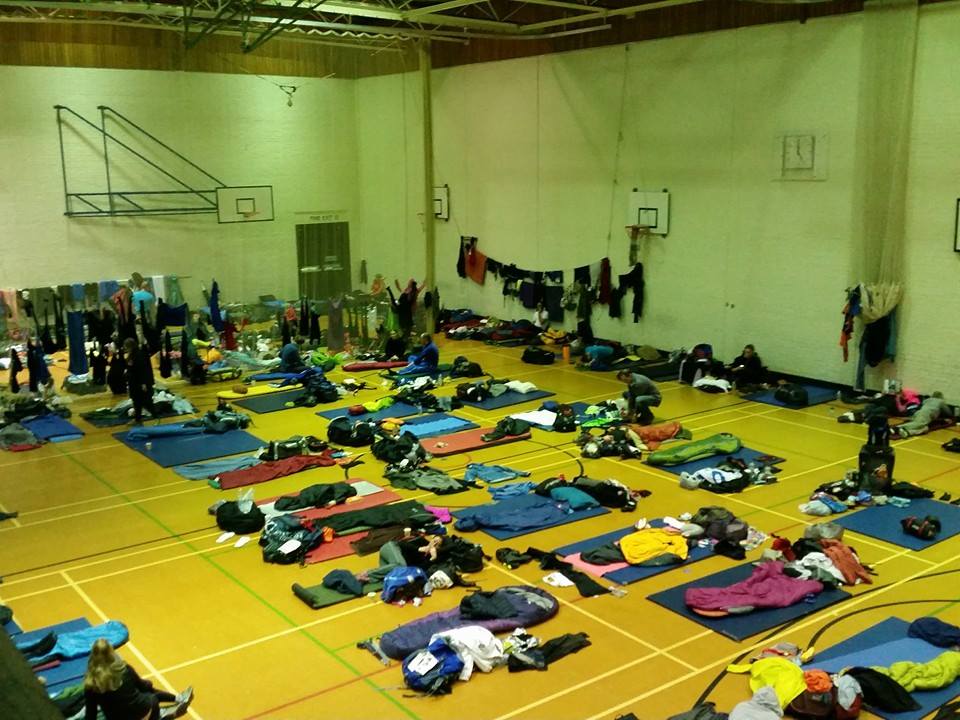 On this final day due to my finish time for day 2 I’d now been given the start time of 9am so had a more relaxed morning.  Running coach Rory Coleman was running and it was him who had encouraged me to take part.  He was starting an hour ahead of me so we had some friendly jibes about me trying to catch him before the end which worked as a good incentive on both parts. I was the new kid after all!

The walkers set off at 7am, then the bulk of the group at 8am and then an hour later we were released to set out on the last leg.  As legs go, mine was still giving me some problems but nothing that was going to stop me finishing this race.  I winced my way across the course being left behind by a few super elite but I was happy to just not be trailing at the back.  We’d had some time to bond over the weekend and it’s easy to run alongside and chat with whoever suits your pace at the time, you’ve got at least one thing in common to talk about anyway.

On the final stretch, just as in a race of any size you have the added boost of adrenalin knowing it will all be over soon.  Soon in this case is 28 miles away but it’s getting closer with every step.  The day went well, and having started later I was soon catching up with the walkers and the slower runners which is a great motivational booster as it spurs you on to chase the next person  one after the other.  To my surprise I actually caught up with Rory at about 20 miles which made me feel great as I wasn’t sure I’d catch him at all before the finish.  I gave him a cheeky pat on the bum as I passed him, he gave me a shout of “Go on big guy! Go and get it”  Only eight miles to go and I was buzzing.  I soldiered through to the end trying to constantly close the gap between myself and whoever was in front, these people I’d seen for a few days were now my markers.  With a strong push to the end I finally crossed the line in tenth place that day which I was absolutely thrilled with.   My overall place ended up at 22nd and considering I wasn’t even sure if I could complete something thins big I was over the moon with that result. 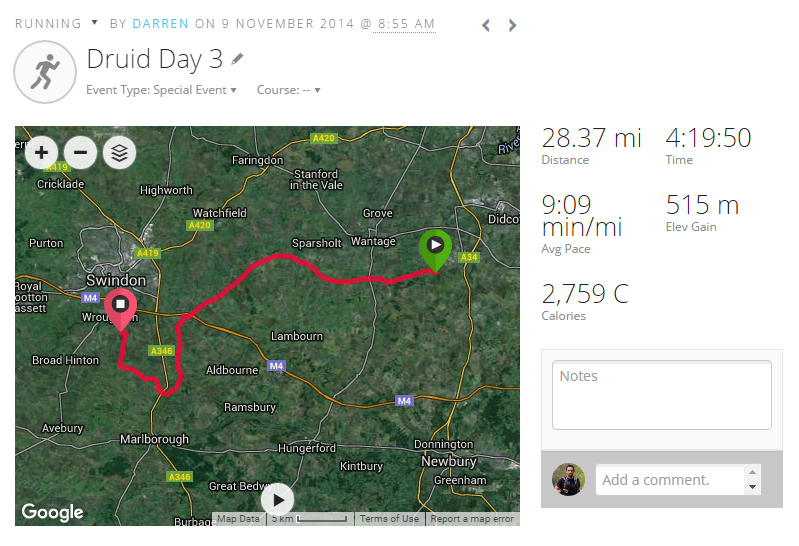 That’s a ruddy long way for little old me. 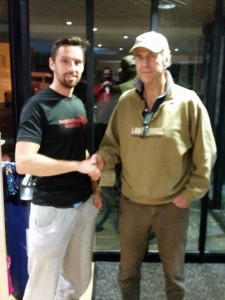 The Druid Challenge along the Ridgeway was a fantastic event for me (warts and all), the route is stunning and it’s certainly something I’d go back to sometime.  The organisers put a great event on, well managed and great fun.  Oh and as a bonus I got to meet the legend that is Sir Ranulph Fiennes.  He is due to be one of my tent mates when I take on the notorious Marathon Des Sables in 2015 so I expect to hear a lot of great stories from this chap.

As my first Ultra I’ll keep fond memories of this experience. 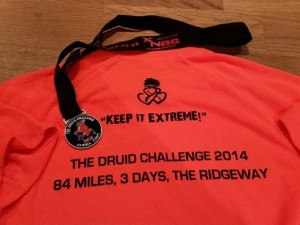