The test run for the Mongol 100 was one of my most other-worldly experiences to date.

A few years ago, the idea of running 100 miles across a giant frozen lake in one of the coldest places on earth wouldn’t have been something I’d even imagine.

After a car accident in my thirties I decided to start running again, it took me several weeks before I could even cover a Parkrun distance in one go.  Fast­-forward to 2018 and I’ve run across deserts, mountains, entire countries and now a lake that’s as big as a British county.

In the north of Outer Mongolia on the edge of Siberia is Lake Khövsgöl, a two-million-year-old lake that stretches 85 miles long, 22 miles wide and reaches depths of 262m. From December to April the lake freezes over as temperatures drop as low as -50c.

I was invited to be a “test pilot” (aka guinea pig) as part of a small a recce group for the Rat Race Adventure team.  To their knowledge it had never been done, so this was an opportunity to try something extremely special and a challenge I couldn’t refuse.

Three flights later we drove 100km across the lake to our start point.  Yes, we drove across the ice.  Apparently at around 20cm the ice is strong enough to support a car, as this ice is up to around 1m thick, the Mongolians confidently use it as a bit of a motorway to knock hours off their journeys.

The obvious concern was the cold, temperatures were to hover between -40c and -50c during this epic challenge.

I carried out a novel science test (see the video), taking a cup of steaming hot water, I threw it high in the air and most it never came down, but instead instantly puffed into a cloud of steamy frost, it was a great trick but also a warning of just how cold it was.

To get it wrong out there could result in frost-nip/bite, loss of body parts, hypothermia.  As I suffer from Raynaud’s anyway, my fingers often go numb even in temperature above zero, this was a concern…

Other exciting parts to look out for were the wildlife which included wolves, lynxes, bears and other sharp-toothed local critters.

Oh, and the ice would occasionally crack open, leaving a gorge into the depths below, so this was especially interesting for the drivers.

We were going to attempt around 100 miles weaving across the lake over three days, camping on the shoreline each night.

The distance didn’t concern me too much under normal circumstances, but the environment and the unimaginable cold was new territory for all of us so we were hoping we’d made the right choices when packing our bags.

I invested in some new kit as well as stuff I already had so I knew they were on top form as I didn’t want to take any chances.

We wore day-packs for the ice and the rest of our kit went with the Mongolian guides who would follow us along the in vans or by horse-drawn sleigh, these were our support crew and would become good friends despite the language barrier.

The Mongols are such humble and amazing people and it was an honour to have them help us intrepid westerners on our slightly bonkers journey.

The days started as soon as there was enough light, it was around -47c at sunrise but would warm up to a toasty -35c by lunchtime.

When running I didn’t want too many layers on as I didn’t want to break a sweat if I could help it, sweat is bad, sweat and condensation freezes inside your clothes, ice and snow form in your sleeves, you can feel ice forming down the back of your next, your hips and even in your bum crack!

Basically, anywhere not quite warm enough will ice over if there’s moisture forming.

As the sun came up, the ice creaked and cracked around us constantly, it was eerie, but you soon get used to it. Powerful booms thundered around like cannons in the distance as the huge plates of ice shifted, this would vibrate through the ice below us and was amazing, it made me feel very small but in complete awe of these epic surroundings.

Aside from the sounds of the ice, the only noise would be the crunching of your spikes into the ice underfoot, it’s amazing how many variations of ice there can be all on one lake.

Smooth like glass, rippled like tiny waves, snow-covered, large overlapping waves frozen in motion, odd circles like giant lily-pads or jellyfish as we called them, huge delicate boards jutting up which had great acoustic sounds, playing different notes as you stepped on each one.

The terrain constantly changed over the distance and it never became monotonous which is what I’d thought could happen.   With it being so flat, you can see the shoreline at all times, it deceptively looked like you could run to either shore in just a few minutes, yet the lake was around 20 miles wide.

From the start of day one, we could see the island that we’d head to by the end of day two, yet this was more than 50 miles away!

For the distance I wore a pair of Saucony Xodus Iso2 which I’d selected with the help of the team at Advance Performance in Peterborough and a gait analysis.

These shoes have served me brilliantly on trails, beaches, roads and snow. Now with the addition of some wrap-around Kathoola tungsten-carbide spikes, they took me comfortably over a frozen so big that I can point it out to my kids on our spinning globe at home.

Down the heel of these shoes it says, ‘RUN ANYWHERE’, I think I’ve put that to a pretty good test and it’s safe to say they have delivered.  With the spikes fitted it was great, not one slip and comfortable run every day.

I had also bought a pair of Salomon Speedspike CS which in tests on the eve of day one were comfy and good for grip on the ice, but the Kathoola’s were simply better.  The Salomons had 15 built-in spikes whereas the Kathoola’s 10 spikes would bite into the ice a little deeper due to there being less of them.  I’m sure the Speedcross will be great on frosty trails but they stayed in my bag for the rest of this challenge.

In temperatures below -40c, almost everything freezes, running gels, water, even jelly sweets. Jelly sweets go into your mouth like a chunk of glass, then you have to wait for it to warm up before daring to bite into it.

I buried a bottle of drink in my bag against my back and covered over with my down jacket. This kept it from freezing, but meant it was a real pain to get a drink each time. I ended up mostly just drinking every few miles when a support vehicle hung around for me.

The best snack fuel win for me was some homemade Christmas cake heavily laced with brandy which stopped it from freezing up! This was a great energy packed snack with added warming qualities.  Take note!

At the end of day one I was the first runner to camp having covered close to a marathon distance, this had taken, just under five hours. I was led by an old Mongolian chap on his horse-drawn sleigh, we’d had a few short races along the way which was great fun sprinting along, but the horse with it’s spiked shoes had way more stamina than me at that pace.

The rest of the runners and trekkers came in over the next couple of hours and we all settled around the campfire for a feast.  Temperatures dropped to -50 and we sat around a big fire, eating wild boar, whilst wolves were howling in the treeline around us, this was simply incredible.

The second day was another marathon, and in the last few miles, that island finally started to get noticeably closer.

We camped on the island, again unpacked our frozen packs, unrolled our frozen sleeping bags and changed out of our wet gear.  This was a challenging admin exercise having to do everything as close to the wood burner as possible as it was still way below freezing even inside our Gers (Yurts).

On this night we ate reindeer (sorry Rudolf), a Scotsman played his bagpipes to celebrate Burns Night, until his breath froze inside the pipes and the show was over.

A nomadic shaman came down from the mountains to bless our journey with a spiritual ritual, she went on her own jaw-dropping journey right in front of us, in a woven wood mask and outfit of rags.

She sang, howled, spoke in tongues and spun so furiously that she fell into the edge of the fire, the Mongolian men pulled her out whilst she barely flinched, her headpiece was alight and they quickly patted it out.

This was surreal, to be in this place, in this scenario, so the running was just a piece of the experience.

On the third and final day we had what we believed was around 50km left to go.

However, as we were on a recce and the course was determined somewhat by the ice and the safest routes, this wasn’t quite what we got.

After around 7 hours I was almost at 50km, we only saw support vans every few miles as the group spread across the ice, I asked one of them how much further, expecting to be on my last km, I was told it’s maybe another 5km or so. I ran another 20 minutes to then be told it could be another 5-6km from there… this was a real mind game and I was forced to open up my bag of Skittles to see me to the end when it eventually came.

Finally, I reached the docks which was the real finish at around 56km, the sun was just setting, and it was a stunning end to this incredible adventure.  My finish was timed perfectly so Jim and Rob, two of the Rat Race team crossed the line with me, however in a novel twist, Jim was on ice skates and Rob on a Fatbike with 4-inch studded tyres, this event was after all, to be completed ‘by any means’.

Get $150 off your entry by entering the code GRIGAS150 in the ‘how did you hear’ section of the registration. You’re welcome! 😉

I am proud to have supported local charity Anna’s Hope for the last few years, each time having to raise the bar to challenge myself further.

During this frosty adventure, I’m chuffed to bits that so many supporters donated more than £3,700 which will provide six months of specialist treatment for five children undergoing rehabilitation from battling brain cancer.  My fundraising page remains open for ongoing challenges and any further support would be massively appreciated.

Buy me a coffee

14 hours in the hands of the Special Forces
Next Story » 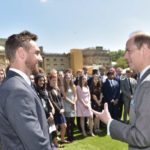 An invite to Buckingham Palace