Earlier this year my good friend Rory Coleman was struck down with a life threatening and debilitating rare illness Guillain barre Syndrome. Rory who coached me towards my Marathon des Sables had just completed his 13th MdS and had a total marathon count of 976 fast approaching his target of 1,000.

This awful illness left Rory unable to walk and resulted in him spending several months in hospital under strict rehabilitation.  30% of cases never walk again and a small percentage can die from the illness as the immune system attacks the nervous system.  Rory and his wife Jen are both running coaches yet for man unable to walk and Jen expecting their second child with a 17 month old already toddling around their income was on hold and expensive treatments, physio and daily hospital trips and child care meant finances were at great risk.

Rory over the years has helped and influenced hundred if not thousands of people in their life, health and fitness goals.  I felt it was a very worthy cause to rally together all who had been reached by Rory and Jen to see if we could help them through this very difficult and worrying time.  I set up a crowdfunding page and put it out on social media in the hope of reaching these people and sympathetic onlookers.

To say I was astounded at the result is an understatement.  So many heartfelt messages and donations came in thick and fast as people gave to and shared the page with donations from £5 to £2,000.  It was and still is overwhelming for me and even more so of course for Rory and his family.  This meant financial worry was less of an issue and Rory could focus on learning to walk again with the potential of a 2-3 year recovery period if at all.

It is fantastic to be able to say after several months Rory was able to take his first few steps unaided and even progressed to a very slow shuffle through a parkrun.  The new baby has arrived and is a beautiful addition to the Coleman family.  Rory was finally allowed to go home and with ongoing rehab and physio is making a slow but steady recovery.  There is still a long way to go but this experience has reshaped his perspective and values.

It’s a huge honour and an absolute pleasure to have been able to simply put a means in place for the masses to then club together to show such amazing support for a guy who has given so much to help others over the years.

These were just two of the very touching messages of support on the funding page:

You both gave us confidence & helped the Smeg team be awesome and loose 421 pounds, so please accept the same for both you and & Jen to help you win your fight and continue to be an awesome family. XX

I first met you in 2000 before the ’01 MdS and was inspired. Your advice helped me through MdS ’14 and ’16. You have helped so many people over the years, it is now our turn to help you. Good luck! 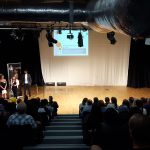 Guest Speaker: Duke of Edinburgh Awards at TDA
Next Story » 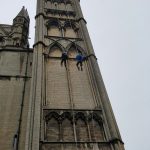