So I returned from my charity road trip across India with a slight case of broken bones on the right foot plus a sprained ankle.

I’d like to say it happened during a speedy run across some mountains or something admirable and brave but in fact it was due to drunken tomfoolery being dressed as Ironman competing to see who could run furthest up a palm tree on the beach in Goa.  The only silver lining is that I certainly won but then promptly found the quickest way back down (with a thud and a crunch).

I had to hobble around in flip flops for the next 36 hours as I had a plane to catch so made A&E my first stop as soon as I got home.  Needless to say I was the only person in Kings Cross wearing Havaianas on that frosty Tuesday morning. 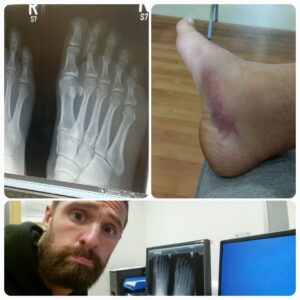 The X-Ray confirmed a fractured 5th metatarsal telling me it could take up to six weeks to repair.  I’m due back in tomorrow for a further assessment so will see how it’s doing.

I’m hoping for the best as I was actually due for a three day running challenge in the Swiss Alps in another five weeks time.  Optimistic much?! There’s of course a strong chance of setting back the repair by trying to literally run before I can walk but I’m going to just have to wing it over the next few weeks and see how it repairs.  Staying quietly hopeful for now.

One of the rules I read on aiding recovery is to not repeat the offending activity…. So I promise not to climb any palm trees in my Ironman costume any time soon. (honest).

Cinderella shall go to the ball (Alps)

Okay so I saw the specialist around two weeks after the initial break and it sounds promising.  The fracture isn’t too severe and is healing up nicely with little worry of me re-breaking it (as long as I stay off it for a couple more weeks).

So with the bones mending up now I’ve just got the sprained ankle and ligament damage to tend to.  I’ve been having some ultrasound treatment on this area which can help it repair quicker and stronger so I’m doing what I can to speed this along including contrasting foot baths alternating between hot and cold to spark extra blood flow as well as just keeping off it as much as I can.

Now the doc says I should be okay walking around in another couple of weeks and that running isn’t off the cards.  So I’m relieved and optimistic that I can still head to the Swiss Alps as planned in five weeks.  It will be a big test as I’m due three days of around 20km a day so I’ll be a little more careful than usual and hope to get through without problems.  Fingers and toes crossed!

So now I’ll need to delicately get my fitness back up to speed without using the gimpy foot too much.   I’ll be getting on the bike and doing a few gentle miles, then into the gym again to hobble around working on core and upper body whilst using a few leg machines that don’t put pressure on the wrong places.

I’m feeling good already just knowing that humpty can be put back together again.  Let’s get back to it! 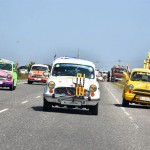